The Story Behind the New Alamogordo Store 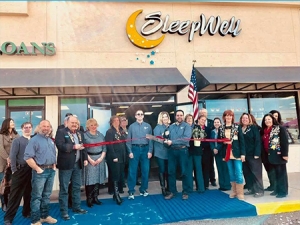 For two years Sleep Well in Alamogordo was located in a building that helped set the company as a “boutique” look and feeling mattress store. “It was a wonderful opportunity just to be able to have our own business at that point, so we loved it and nurtured the business as best we could,” says Javier, owner of Sleep Well.

During those two years, the company expanded to a location in Carlsbad New Mexico, a 10k sq ft behemoth of a building.  “We knew that if we tried to fill that large of a storefront with nothing but mattresses, we would overwhelm our customers with an endless sea of white rectangles and lose our attention to finding them the right support in a mattress. So we experimented with buying small batches of furniture to see if we could sell furniture successfully” said Javier.  “I enjoyed being able to decorate and set up the vignettes for people to see what the furniture would look like in their homes,” Gretchen Casillas, owner of Sleep Well.

The initial purchase of furniture in the Carlsbad store did not go as well as initially planned.  The couple had purchased several large sectionals and large bedroom sets that sat for several months before they sold.  “We were concerned with the lack of sales on the larger pieces, and we couldn’t figure it out,” Javier.  The couple, by chance, had the opportunity to make several deliveries to customers one afternoon and upon doing those deliveries discovered the reason why those pieces hadn’t moved.  “The customer base we were getting at that point was moving into smaller rental homes.  The living rooms and bedroom space were just too limited for our purchases.”, Gretchen.  After that discovery, they adjusted their purchasing techniques and have found a very successful furniture buying pattern that has led to their want to increase their Alamogordo presence.

When they discovered that differences in who was their customer and what their needs were they began to wonder what it would be like to operate with furniture in Alamogordo.  The idea was the initial lead to wanting a larger location in the Alamogordo area. 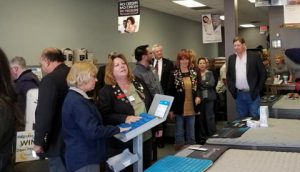 They began by introducing a few online catalogs to their customers in Alamogordo and with several sales under their belt they were starting to find a need for a larger building to house furniture lines their clientele had found interesting.  It seemed a big undertaking since the Alamogordo economy was still in a stall mode and was barely starting to see an uptick.  “Our faith in being led down the right path is what drove us to not worrying to death about starting such a large undertaking for us,” Javier.

The search for a new building ended when one day they received a flyer by mail on a building less than a quarter mile from the initial location.  The building once housed a successful flooring retailer and had just recently been vacated.  “I fell in love with it as soon as I saw it,” Gretchen.  The idea of the new building would only take hold after the couple noticed that they had maximized the sales possible in their current location.  “You can only help so many customers at one time in 15oo sq ft. We were helping three couples at a time often in that space, while it helped us become friends with our customers it did at times limit the time spent with people.”, Javier.

It took three weeks of renovation by the landlords and a week of painting walls by Kenny Lawson, store manager, to get the building to be the gem it is today.  The move itself was the easy part, taking only one day.  “The real work is coming when the furniture fully arrives,” Javier.  The couple plan on offering bedroom sets, living rooms, dinettes, and decor in the new location.  They’ve done the research this time and feel like they have their finger on the pulse of what Alamogordo is looking for.  “It’s scary at times to think of the increased responsibilities, but I know we can do it!”, Gretchen.

Come down and see the new Sleep Well store for yourself.  The same values of helping their customers find the right support for their sleep translates easily to help their customers find the right furnishings for their homes.  The prices are real and not gimmicked, the sales are true savings and not just inflated numbers.  When you’re looking for a great store to shop, think Sleep Well.

Remember when you Sleep Well, you Live Well.

Javier is the owner of Sleep Well, professionally trained sleep stores, specializing in specific mattresses for specific needs. He lives to give. He is an active member of his community and church. His hard work and efforts pay off for him when he can help others, and give to efforts for the betterment of others.
His spare time is spent with his beautiful wife, Gretchen. They are craft beer hobbyists who enjoy making their own beers, visiting small breweries, and making new friends. Their lives revolve around church, family, exercising, four great dogs, and keeping up with their home in Alamogordo NM.

Lilli Pate
06:26 31 May 20
Best mattress place on planet earth, they provide the best qualities of mattresses and never rip offs like a lot of... other matress places. They love making people days and giving others the respect and giving them the best sleep for them. They also sell some GREAT furniture that is very good quality. 10/10 recommend and prepare for the best sleep of your life 😊👍read more

Nikk E
19:12 27 Aug 19
Everyone was friendly and knowledgeable. I would recommend that you go to Sleep Well for your next mattress.

Eric Henriksen
17:46 28 Jul 19
Amazing place to shop for a new mattress. Learned more about all the different types of materials and how they can... affect your sleep in the short time I was in there than I've known my whole life. The delivery guys were great as well. After they set the bed up and we saw how high the matress was off the ground, too high for someone 5'8", they offered to swap the box springs out with a low profile set which put the bed at a good height. Definitely recommend you check them out if you're in need of a new bed.read more

Caroline Boles
03:42 19 Jun 19
I am so impressed with the service and sleep system we got from Sleep Well. I wear a Fitbit and can see that I am... sleeping an hour or more longer with my new bed. The staff at Sleep Well took the to make sure found the perfect fit down to the pillows.read more

Rey Martinez
05:15 17 Jan 19
So happy to find a great furniture business in Alamogordo. We drove to Las Cruces and to El Paso looking for a new bed,... and every salesperson we met were in a hurry to sell us the most expensive bed without explaining what bed was best for us. A few weeks later we decided to walk in to the Sleep Well store which was about 5 minutes from our house and after getting a bed 101 course from Gretchen and Javier, we knew they were the real deal. They had the best prices compare to the other stores we went and explain which bed worked better for my wife and me, with no rush to sell us a bed. We are very happy that we decided to purchase the bed they recommended, and after sleeping the first night the results were immediate. Highly recommend this store, and their new location on 1st street is amazing. Go now if you haven't had a good night sleep, these folks will make sure you sleep well again.read more

Jill Creel
03:51 25 May 18
Javier and Gretchen did a fantastic job in organizing a mattress purchase and pick-up from states away. There were a... few hiccups along the way but I don't hesitate giving them 5 stars. Thanks for your help in our long-distance purchase.read more

Zane Lewis
01:44 22 Jan 18
Amazing store. They treat you well and will help you get what you want. The owner is also quite flexible and has great... package deals. I would highly recommend this to anyone who is in the market for a great mattress. Great personable people who actually care for you and not just the sale! Overall amazing experience, definitely worth every penny.read more

D'Laney Fleming
17:33 07 Jan 18
All the staff at sleep well are fantastic people. Knowing they do not work on a commission and still care so much about... your needs is huge. We recently purchased the King Koil and got the most firm mattress. After getting it home, I hated it. I called the store and they responded to my request to try the more plush model immediately. I completely love my new mattress now. And it has a 25 year warranty!! We will recommend Sleep Well to all of our friends and family because we know they will get great products with great service!! Thank you Sleep Well! The Flemings in Roswell, NMread more

Katie Phillips
21:58 16 Sep 17
If you're looking for a $200 mattress, this is not the place to go. This place carries only top quality products, and... they stand by every product they carry. After reading all the reviews, we went to this place first for our replacement mattress. We weren't disappointed. They are a very family friendly place, and we got help right away. We went in not knowing what we were looking for, but we did know what we didn't want. They were incredibly helpful in comparing mattresses without up-selling or down-selling anything. We fell in love with several items, and I was adding up the cost in my mind. Once we decided on our purchase, they added it all up and applied several discounts we were not anticipating, and we came in WAY under budget. What was even better, was who we worked with in the store, was also who delivered to our home! And when the products we purchased didn't fit as we anticipated, they replaced the box-spring with a bunky-board within 20 minutes! Talk about personal service! We were impressed all the way around for the products they carry and the service they provided. We are very happy and highly recommend this business. We will definitely be back, and we will for sure tell all our friends!read more

Matt Herold
17:06 31 Jul 17
Bought some pillows from another store in town because I desperately needed new ones. For several months I was getting... horrible sleep with them; waking up not feeling rested and constant neck/back problems. Javier hooked me up with some quality pillows and since, I've been sleeping much better. So impressed was I that I went back and purchased some bamboo bed sheets which are also fantastic! Sleep Well stocks quality products, treats you well, and stands with you in meeting your satisfaction.read more
See All Reviews

What’s in Your Cart?

The Gift of Great Sleep

Tips for Silencing Your Racing Mind
Scroll to top